Follow my blog with Bloglovin
Posted by Pomegranate and Eye at 3:57 PM No comments:

I kept hearing laughter, loud talking, joking coming from my boss' office.   It was late afternoon.  I had just said goodbye to my boss.  So what was going on in her office?  I kept working.  I had an hour left til the end of the work day and too much to get done, so I didn't get up to go check.  But the noise went on, for a good 45 minutes.  And slowly -- as I subconsciously tuned into the conversations - I realized what was going on.

The reason for this gathering?  It wasn't a party.  But it was a "disconnect".  They were gathered there for a better look at the jumper.  Because we're on the 19th floor, we have a view of the city and the freeway below.  In the nine years I've worked in downtown L.A., I've seen several like him climb over the bridge railing and  think about ending it all.  People kept coming and going into the office. And I heard "is he still there?", "anything yet?", "wish he'd jump already."  There were jokes made, someone suggesting "music to jump by."  More laughter.
I am so  hurt and saddened by this display of insensitivity by my coworkers.   As I sat at my desk trying to focus on my work, I couldn't.   I thought about the crucifixion, and how the people taunted Christ when He was on the cross.  I thought about how alone He must have felt and how alone the jumper must be feeling on the bridge.  From the corner office I could hear them calling him a "loser", an "idiot", a "nut".

We hear so much about bullying in schools.  What about bullying in life?  That's what was going on.    Sure, the victim wasn't right there, but it was that same taunting, and the banding together of those that were doing it....with a common goal.  To mock someone less fortunate.  What would have happened if instead they showed caring and concern for this poor man in his time of need.  What would have happened if they came to his aid and helped him off the bridge?  But it was probably that very mocking that brought the jumper to this point in his life.  Maybe by others, maybe by his own inner self.

As disappointed as I was though, my deepest disappointment was in myself.    I didn't participate in that corner office gathering, but I am no better. By choosing not to say anything, I allowed it to go on.    I thought about what I could have done.  I wouldn't have been able to go down to the street level and deal with the jumper, but I could have gone into the office and expressed how I was feeling and maybe that would have made some of them think about their comments and actions.  So why didn't I?  Did it have to do with fitting in?  A little.  But it was more that I felt it just wouldn't make a difference to them..or to the jumper.  But the truth is that it did make a difference.  And because I did nothing, it made a difference to me.   Try as I might to work, I couldn't.   I couldn't stop thinking about it.

Eventually, the police got to the jumper and convinced him to step off the bridge.  Thank God.  The show was over, and everyone went back to work.

That night, I said a prayer for the jumpers of the world -- those that are lonely, the taunted, the bullied. I prayed that God show His love to them through us.  I prayed for the bullies...that God open their hearts and fill them with compassion and love toward others.  And I prayed for the silent - that God would open our mouths to help us to speak out for injustice.  And give us courage to do what was right. 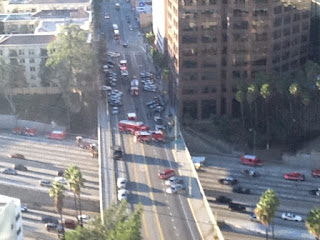 This morning, at my desk, I received an email from my boss.  It was a mass mailing to the entire office.  A photo from the previous afternoon accompanied the email - "Here's a view from my office, " it said.  "What's new with you?" and a happy face.

This time I did speak up.  I wrote her an email response, and told her how sad the whole thing made me...what had gone on in her office...and how this man on the bridge was someone's child..someone's son.  I told her how disappointed I was in myself for not speaking out.  And I continued, "...and so I needed to write this in response to your email...because staying silent didn't sit well with me."

I received a response: "thanks for the reminder that I need to be more sensitive. I know that was not your intention, but I need to work on that for myself."

I need to work on that for mysef too.

Tidings of Comfort and Joy -- Heavy on the Joy!

I’m still smiling from last night’s homeless outreach.  I’ve been thinking about it since last night.  I think one of the reasons that our In His Shoes homeless outreach is so successful is that we’re “heavy on the joy".  Sure, we provide food and clothing…that’s the comfort, but nothing was more evident than the joy factor last night.

The joy started before last night.  A few nights ago, when we realized we didn’t have enough clothing to share, we put out a post on Facebook.  I was really surprised at the outpouring of love that came forward from that one post.  Friends I haven’t spoken to for months responded, dropping bags of clothing at church for us.  Sunday after church, another several bags were taken to the back of my car from parishioners who had seen the post.  Text messages bounced back and forth about sock donations, a friend’s trip to the store to buy jackets and sleeping bags for us.  People were responding out of joy and love.

And then there’s the preparation.  Our prep time takes about an hour as we gather everything we’ve collected, clothing, snacks, soup, water.  There is joy in the unwrapping of the soup containers, in the packing of the cars, and then in the distribution.  I was hearing it last night in the laughter as Suzie and her crew distributed the right item of clothing to the right person.  The joy was definitely there when we sang Silent Night or the Hippopotamus song while handing out soup out of our car, and it was there when we received the blessings and smiles of those that we helped.  You have to picture it….as we pull away, they wave at us, thanking and blessing us.  We thank and bless them in return. We are the ones that are granted this privilege to help them.

One of the regulars on the street is a missionary from Africa named Doris Dolly Dorothy.  Dressed in gleaming white with a beautiful smile, she is there on the street by choice to live a life of poverty among the least of her brothers and sisters.  Suzie shared with me her message. She never takes food from us…but gives of her smile and herself.  She shared that Thanksgiving on the street was “too much blessing” as there was an abundance of people sharing their food and blessings with the others.  She shared, “People here hate me”.  “Why?” Suzie asked.  “Because I sing and pray all day, but I’m okay with the fact that they hate me…because they hated our Lord first.”  She was comfortable in knowing that the hatred was coming from a place of not understanding.  She is there to share her inner joy with those less fortunate giving all she can of herself to them.  Like I said, she never takes food for herself, but what she will always take is a warm hug from us, her “sistahs.” She’s definitely got the JOY.

If you are blessed with a family, you know the joy that comes from having them around.  When we go out to the streets, those of us who have been doing this for years now feel this same joy. We go out to visit our extended family.   We hear their stories – about careers that never took off, rent payments that couldn’t be met, family struggles, illness and no insurance, debt.  They are like our family, no different than any of us except for the fact that they lack the support systems that we have been blessed with.  Think about it.  If we didn’t have family or our church to lean on in these difficult times, how many of us are just one paycheck from living on the street?  There but for the Grace of God, go I.  And just like our family, they appreciate being cared about.  Not just “Here’s a cup of soup. Here's a frisbee,” but “Hey, how’ve you been?  How was your month? Are you feeling better?”  It’s not about charity, it’s about love.  And “BEING THE LIGHT and of Christ, being the vehicle for God’s love.

If any of you out there are interested in starting your own homeless outreach with your friends, family, organization but don’t know where to start, please contact me:anush@pomegranateandeye.com and I can give you some logistics help.

Some of our local radio stations have been playing Christmas Carols since Thanksgiving.  Personally, I love it (even though it’s driving my coworkers crazy).  I’m sending out Tidings of Comfort and Joy for this Christmas and well into the new year….Comfort and Joy, but extra heavy on the Joy!

Posted by Pomegranate and Eye at 8:14 PM No comments: